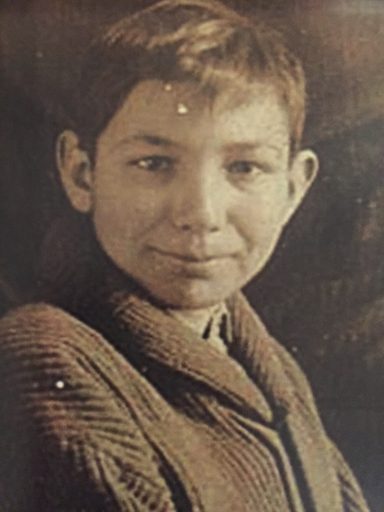 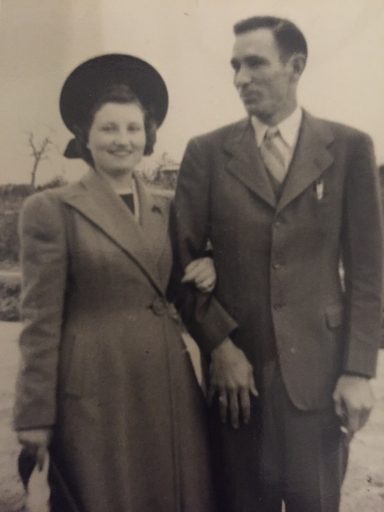 Ben and Mel Gibbons soon after their wedding 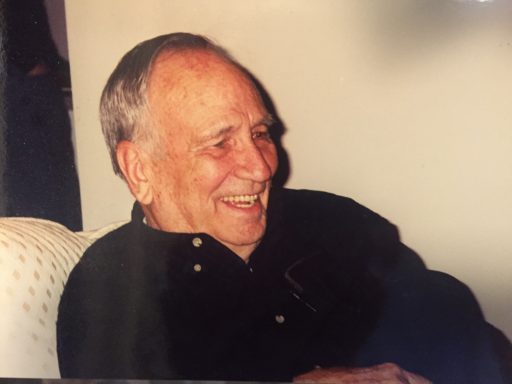 I loved my late father-in-law.  And I think it was mutual.  Right from our introduction in 1964, he seemed to believe I was exactly the girl for his older son.  He became all I ever wanted in a father–supportive, dependable, and kind.  His sterling qualities did not come out of nowhere.  He came from a respected, hard-working farm family.  However, for whatever reason, his parents were not the most affectionate people in the world.  One time Ben Gibbons Senior assigned twelve-year-old Ben Jr to dig a row of fence holes for a new pasture.  On inspecting the finished job, Ben Sr. said, “One of the posts is out of line.  Fill ‘em all in, and dig a new row. That’ll teach you to do a job right.”

All that extra work because one post–one out of maybe thirty–was out of line.

Ben and Ella Gibbons had sent their three older children off to boarding school, but for some reason never revealed, they decided Ben Junior would attend public school at Holtville, in Elmore County.  The Gibbons lived just over the county line in Autauga, so the nearest school bus stop was three miles down Highway 111 at Shoal Creek Crossroads.  Young Ben had to get up early enough to help with milking, feeding farm animals, and other chores before heading out to the bus stop.  If the weather was stormy, he ran.  Since he owned no coat, but only a sweater and a raincoat, he ran to keep warm during bitter cold weather.  The principal of Holtville School at that time later told us how it wrenched his heart to see such a fine young man arriving at school half frozen.  Finally, Mr. Bell could bear it no longer.  He paid a visit to the Gibbons home and pointed out the need for a coat.  Ella Gibbons kept silent, but her husband spoke for them both, “Life is hard–the boy might as well find that out early.”

Daddy and two of his siblings all told me at different times that they never recalled their mother embracing them.  There must be more to that story–something that would explain, if not excuse, such coldness. If so, I never heard it. Maybe, in Daddy’s case, it was because he was chosen to be Ben Jr, even though he wasn’t the oldest son. When Daddy mentioned that lack of affection, my heart ached for him.  It still does.

When Ben Jr became a teenager, farm responsibilities only grew heavier, and his parents allowed him only Sunday afternoons for fun things.  His cousin Bub, who lived across the field on a neighboring farm, had more lenient parents.  As a teenager, Bub went to dances at Blackwell Fish Camp on Saturday nights and often invited Ben Jr. to go with him.  In his later years, Bub recalled that Daddy might have gone dancing once or twice, but that’s about all.  “Uncle Ben and Aunt Ella didn’t see much point in fun,” he said.  “Besides, to them, dancing was the work of the devil.” Daddy had to sneak off and lie to do things like that, and he knew his parents would eventually find out.  It just wasn’t worth it.

When, after high school, Daddy decided to go to Auburn University , it must have seemed like a glorious escape.  Even though he worked at whatever jobs he could find, he had some free time too.  In an uncharacteristic burst of generosity, his parents told him they would send him $10 per month toward his education as long as they were pleased with his behavior and his grades. At Auburn he blossomed.  He made lifelong friends–including  J.C. Phillips.  “Phillips,” as Daddy always called him, introduced Daddy to Mel Atkins, an Auburn girl who was the best friend of Phillips’ girlfriend and future wife, “Babe”  Pace.

Daddy must have thought he’d died and gone to heaven when he met the fun-loving Atkins and Pace families.  They loved to eat and they loved to laugh. And they knew quality when they saw it.  Daddy was witty and intelligent and good looking and they took him right in.  I’ve joked that Daddy would have married Mel Gibbons just to get into that fun circle.  But, of course, there was more to it–he had found a pretty girl who appreciated him and let him know it.

Ben and Mel married a few months before he graduated, but kept it secret from Ben’s parents.  Ben Gibbon Sr. would have canceled the promised $10 a month.

Ben and Mel had many struggles in their early years of marriage.  Once, in the early fifties, Daddy became so sick that his weight dropped to 135–a skeletal weight for a large boned man well over six feet tall.  He was unable to work for a while, then finally a doctor found his problem–a tumor on his parathyroid gland–which could have been fatal without surgery.  Ben Sr left Pine Flat to visit his son in the hospital in Mobile.  During the brief stay he gave his son a hundred dollar bill.  “You can repay it when you go back to work.  I want it returned just the way I’m giving it to you–a one hundred dollar bill.  Don’t send me any five-dollar-at-a-time payments.”

It was the old man’s last chance to say with his actions, “I love you, son,” and he blew it.  Knowing my late father-in-law, Ben Sr would have gotten the money back regardless.  Daddy never could stand owing money.

Daddy learned the hard way never to let pass opportunities to show his love to his own children and grandchildren. He showed it to others too, including me   I have always tried to measure up to his example.  So did many, many of his students through 43 years of teaching.  Daddy has been dead for seventeen years, but the love he showed for others lives on.  It will live as long as anyone privileged to know him is here on earth.

Rest in peace, Daddy.  There’s never been a better father. You did indeed learn to do your job right.

2 Responses to DOING A JOB RIGHT