TOMMY SHOWS HIS GOOD SIDE 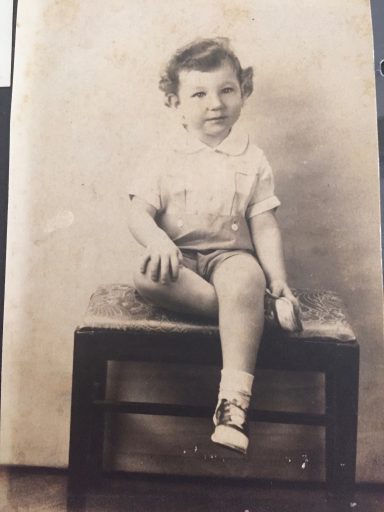 My Benjamin at about 4 years old.

My husband’s Uncle Tommy never followed anyone’s rules, or changed his ways to suit others.  Perhaps that was a big part of the reason he never married.  Partly because he had been an adored first child, he always expected to be catered to and indulged.  Being a hard drinker sometimes made him a burden for his family too.  Yet over the years I have heard from various relatives, “Tommy had another side too.”  Sometimes he would come in with a new dress for my mother-in-law, who was the baby of the family.  Not just any dress.  Somehow he could always pick the right size and style to flatter her.  And price was no object. At Christmas time he might show up with the very children’s toys that finished out what might have been a skimpy holiday for some of the nieces and nephews.  Often he would decide to buy my husband and his brother school clothes.

August of 1954 was one of those times for my husband, Benjamin.  Benjamin had reached that age when he had become acutely aware of the opinion of his peers, especially in Auburn.  There he was a country boy come to the “city” and had lots of opportunities for embarrassment.  On this occasion his family was visiting Atkins relatives in Auburn when Uncle Tommy showed up.  His pockets were loaded because it was payday, and he had obviously had a few snorts of whiskey.

“Benjie,” he said to my future husband, “we’re going to walk uptown and buy you some new clothes.”

Benjamin hung back.  Uncle Tommy was staggering and smelled bad.  His shirt was stained and it wasn’t tucked into his pants on one side.

Benjamin turned to his mother to save him, but she was probably thinking that new clothes would make up for some of the unpaid loans they’d made to Tommy in the past, so she said, “You can go.  Just be back in time for supper.”

So they left, with Benjamin lagging as far behind as he dared. Tommy shouted hello to a neighbor and waved to someone in a passing car.  Unfortunately, he knew everyone in town–and every dog.  Every dog they met wagged a welcome, and one–Miz Agnes Zeller’s dog, Jiggs–fell in behind and began sniffing at the seat of Tommy’s baggy pants.  Unfortunately, the reason soon became obvious.

Jiggs ignored both her and Uncle Tommy.

Mortified, Benjamin wished with all his heart that the sidewalk would swallow him up.  It didn’t.  His steps slowed and he pretended a sudden interest in the upthrust root of an oak root mounding the sidewalk in front of him.

“Times ‘a wasting, Benjie,” Uncle Tommy bellowed up ahead.  “I don’t have all day.”

Benjamin speeded up a bit only to slow again when he heard Uncle Tommy break wind once more.  A moment later Tommy turned and said, “Benjie, I’ve messed my pants.”

They reached the store and Uncle Tommy held open the door for him.  “We’re going to get this young man outfitted for school,” he told Mr. Green,  the store manager.  “Two pair of pants, two shirts, socks, and shoes.”

“You must be loaded,” said Mr. Green.

“You don’t know the half of it,”  Benjamin mumbled.  The manager wrinkled his nose and shooed Jiggs out.  “That dog musta rolled in something.”

Suddenly the manager seemed in a rush to take care of Tommy’s list.  Eyes on the floor, Benjamin followed the manager from one table and rack to another while Uncle Tommy shadowed them, talking as he went.  Customers and sales people cleared the floor around them.  It seemed like hours before Benjamin was handed the bag of clothes and he could rush outside.

“Good idea,” Benjamin said, hugging his school clothes to his chest and breaking into a run.

Back behind him he thought he heard another explosion.