LOOKING FOR THE GOOD 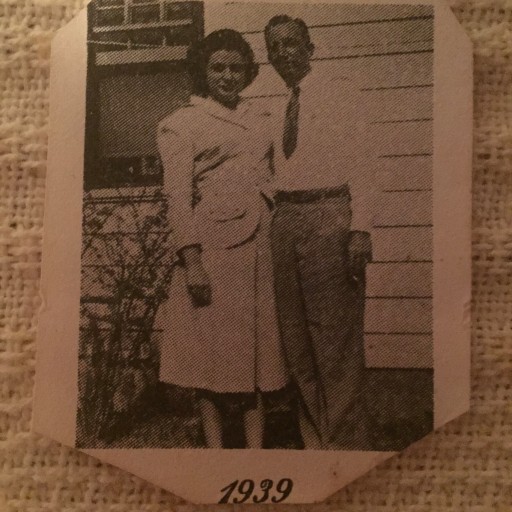 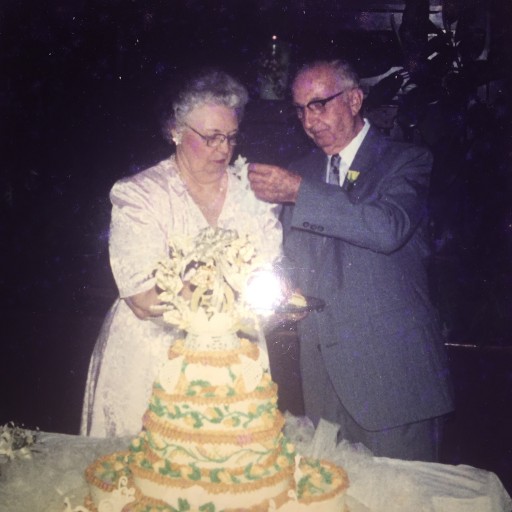 Lura Johnson Atkins always looked for the good in every person or situation.  I used to say that if a hurricane blew away their back porch, she would say, “Really and truly, it was for the best.  We needed a new porch anyway.”  She met me before my future in-laws did, and gave them a glowing report on me. And I wasn’t the only one. According to Aunt Lura, she had wonderful in-laws, her boss was a fine man, her neighbors were all lovely people, and Auburn was the best town anyone had ever lived in.  Such declarations were usually followed by her trademark saying, “Honey, I’m not kidding.”

This positive outlook must have been part of what drew Eugene Atkins to her.  A friend took Gene by the Johnson farm one evening in 1936.   Twenty year old Lura had already rolled her hair and gone to bed.  She only reluctantly got up and put on a robe to  greet the guests.  Gene was smitten at once by the pretty, dark-haired girl.  When they left the house, Gene said, “Well, tonight I met the girl I’m going to marry.”

“Not any more,” answered Gene.  And he was right. Soon Uncle Gene was the one taking Lura to church and to the movies.  After Gene’s mother saw they were serious, she took Lura aside and confided that if she married Gene, there would likely be no children.  “The mumps fell on him.”

That had to be a disappointment to Aunt Lura, who loved children so much.  “But what could I do?” she said.  “I already loved him.”  Sure enough, there were never any children. But their home was seldom empty.  Gene’s father spent his last years with them after he was widowed. He loved to play dominoes and Lura was his partner in many games every day.  After dementia set in, Lura was the only one who could calm him.  A number of Auburn students, including my husband, made the Atkins house a second home.  Every one of those students would swear that Aunt Lura made the best fried chicken ever to grace a southern table.  Finally, Lura’s mother spent her declining years with them.  Then I saw firsthand Aunt Lura’s calming ways work miracles.  Mama Johnson seemed permanently discontented, except when Lura was dealing with her.  Lura gave her a basket of towels to fold, and the old lady folded them over and over and over.  “You fold towels better than anybody,” she would say, “and honey, I’m not kidding.”

Aunt Lura was a career woman too.  She started off as a lowly sales clerk at the Poly-Tek, Auburn’s premier women’s clothing store.  She had a way with customers and many sought her help in deciding which outfit to buy and what to match with what.  Eventually she was the buyer for the store and would go to fashion shows where she made the decision which items to stock of each designer’s offerings for the season.  The owner of the store coordinated his retirement with Lura’s so that they both left Polly-Tek at the same time.  “Charlie was the best boss in the world,” she frequently said, “and, honey,  I’m not kidding.”

After retirement, she and Gene fully enjoyed each other.  They visited friends, worked at Auburn’s First Methodist Church, and hosted family gatherings.  At home, Uncle Gene did most of the housework and dishwashing, Aunt Lura did all the cooking.  By this time Uncle Gene’s health was going down.  He had heart by-pass surgery, cancer treatments, and a bad case of shingles from which he never completely recovered.  Yet with Aunt Lura’s confidence and cheeriness, Gene seemed to feel that he would live to be a hundred.  He did not make it anywhere near that long.  He was still in his seventies when death overtook him.

I visited Aunt Lura soon after Uncle Gene’s funeral.  “Could I tell you something?” she asked.

“Don’t tell this to anyone.  They’ll be saying Lura has gone around the bend.  But, honey, I’m not kidding.  It really happened.”

“I saw Gene two days ago.  I had just laid down, thinking, how am I going to live without Gene?  Then I looked up and there he was, a few feet away.  He was smiling and holding his hand out to me.  I knew he was trying to tell me he would be with me every day.  And he’s waiting for me on the other side.”

Aunt Lura kept working at the church until well after 90.  Even after she went to the nursing home she was still playing dominoes and keeping up with what was going on at church.  She was looking forward to celebrating her hundredth birthday a year from this July, but God had other plans.  Week before last, she took bronchitis, which led to pneumonia.  On May 9th she told her niece, Teresa, that she was ready to go home.  A short while later, on Mother’s Day, she did.

She’s walking hand-in-hand with Uncle Gene now, and I can just hear her telling St. Peter that those gates are the nicest she has ever seen, and, honey,  she isn’t kidding.

2 Responses to LOOKING FOR THE GOOD