THE FAMILY REUNION OF ’52 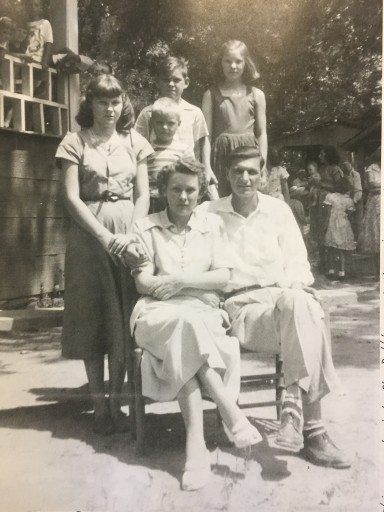 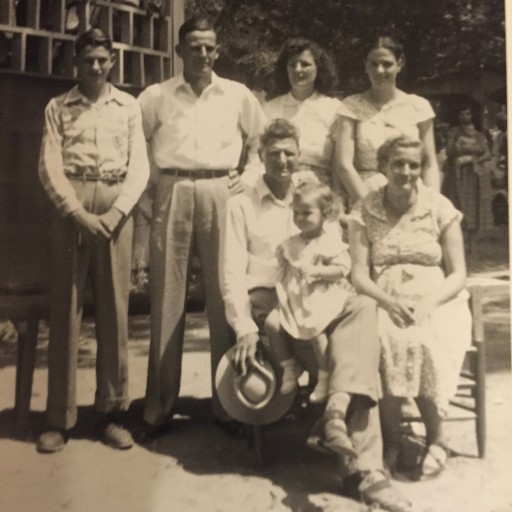 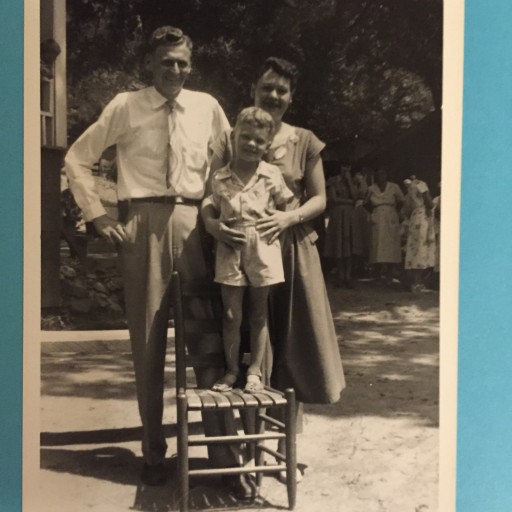 Uncle William and Aunt Hilde with son, Johnny. At Hilde’s left elbow, way in the background, is Faye, chewing her nails.

My father’s family wasn’t big on family reunions.  They used the Hopewell Baptist Church Homecoming every second Sunday in June as their extended family gathering.  But one year someone decided we needed a genuine family reunion.  I’m sure it wasn’t my mother.  Only a few months before she had suffered a nervous breakdown, and was even more reluctant than ever to be in crowds. I still recall her grumbling as we loaded food dishes into the trunk of Daddy’s financed Hudson Hornet.

“I wish ever’body would keep their tails at home where they ortta be,” she said.  “Ever’body could eat their own food at home and mind their own business.”  But at least she wasn’t fussing about liquor.  At this time Daddy was trying his best to stay sober, as he swore to do after a near death experience when he recently had pleurisy.  He had unknowingly combined medications that formed a near lethal mix.  In a constant struggle with alcohol craving, Daddy was nearly as nervous and cranky as Mama.

Us kids weren’t getting along much better.  I was fourteen, which these days is considered reason enough to be in a permanent bad mood.  But there was more.  I had a lot more responsibilities for housework and childcare since Mama’s breakdown.  Even worse, Daddy kept hinting to visiting relatives that “another little un” would solve all Mama’s problems.  I was sure it would only make everything worse. Since I had recently learned the “Facts of Life” from Reader’s Digest, I knew that pregnancy could be prevented, and in my opinion, certainly should be in this case.

Then there was car seating to wrangle over.  Jerry sat in front with Mama, because he was “the baby.”  That left Jean, John, and me to fight for the window seats in back. As I recall, the Hornet’s backseat wasn’t too roomy to begin with, and the middle position was worst of all.  It was also the hottest place on this July day.  Jean and John had been faster than me and were clinging like mud to the window positions when I shoved in.

Daddy solved that squabble.  “If ya’ll don’t shut your traps, I’ll pull out my belt and give you something to belly-ache about.” I took the middle seat.

We began what seemed like a long, long drive from the Tunnel Hill community just above Dalton, Georgia, to Uncle Roy’s house on Talking Rock Creek in Carter’s Quarter.  Likely it was a lot shorter than it should have been because one of Daddy’s greatest thrills was “showing what the Hornet will do.” As he whipped around curves and passed slower vehicles with inches to spare, Mama kept up a continuous wail.  “Lord, have mercy, George!  Slow down! You’re going to kill us all, George.  Don’t pass.  Don’t pass two at a time! Lord, have mercy!”

I guess the Lord heard Mama–we arrived intact at Uncle Roy and Aunt Mame’s house.  Many of the family had arrived earlier.  Several wagons were parked around the yard.  There were trucks and a few cars too.  most of the newer vehicles belonged to the “rich” Junkinses from somewhere over in Alabama.  Daddy pulled up between the improvised picnic tables and the well where everybody could see his car.  I knew that he would soon have the hood up and be showing every interested man or boy what a fine motor Hornets had.  No doubt, he’d be dangling the necktie he was wearing on to the motor.

Actually, he ended up pulling the tie off to wipe the oil dipstick.

Girl cousins all around were dressed in their best and some had brought their sweethearts.  I heard some of the aunts asking Mama “Ain’t Faye going out with the boys now?” I burned with embarrassment and chewed at a  fingernail as I pretended not to hear Mama’s standard reply, “No, she don’t care a thing about boys.” She was right, and she was wrong.  I was interested in the idea of dating, but scared of ending up like practically every married woman I knew–trapped with a domineering, abusive husband and a houseful of children.

If I could go back to that day, I would talk to all the older people at that gathering.  I would ask grandparents, great grandparents, great aunts, and uncles about their lives, what happy things had happened, what scary things, what advice they would give me.  But I was too young and too unhappy to see this opportunity.  In the photographs taken that day,  I can see the sadness in my face.  In one photo I am in the background biting my nails.  In our family grouping, Mama looks even sadder than I recall.  She is 29 years old with four children, and, if my arithmetic is correct, the fifth one is barely on the way..  As much as I didn’t want him, Mike turned out to the baby I loved as if he were my own.  A more beautiful baby I have never seen.

I remember one other thing about that long, long day.  On the way home Daddy would not stop for me to pee.  I begged, almost crying, but he just kept saying, “You can wait. No place to stop anyway, this late on a Sunday.”  Mama pointed out places, but Daddy ignored them.

Finally, I took the only option I had.  In the darkness I eased up my skirt, tugged down my panties, and peed into the upholstery of the 1949 Hudson Hornet.

I’m still not sorry I did it.  And I still feel the relief.

One Response to THE FAMILY REUNION OF ’52