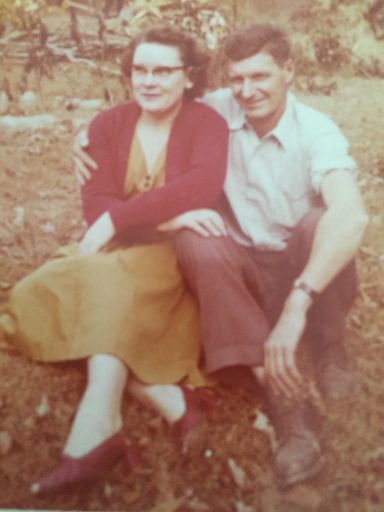 My family was poor in my growing up time, but we did not really see ourselves as poor, since we always knew people worse off than us–sometimes much worse off.  True, we seldom had anything beyond basic needs.  No birthday gifts, and often no Christmas gifts either.  Shoes for kids were not in the budget unless it was cold weather.  Mama’s kitchen staples were flour, meal, sugar, lard, canned condensed milk, dried beans, potatoes, and margarine.  We almost never had crackers, peanut butter, cookies, fruit, or fresh milk.  We couldn’t store things needing refrigeration, since we had none.  But during gardening season, we had all kinds of fresh vegetables that we raised.

One thing that was good about poor families back then is that they usually had no debts and no big monthly bills.  Our rent was usually $20 or less because Daddy simply would not rent anything more expensive.  The electric bill, after we began renting houses connected to power,  was maybe $4, because all we had using electricity were lights, a radio sometimes, and an iron.  Back then, anyone borrowing money was looked down on.  About the worst thing you could say about a person was,“He owes everybody in the country.”  “We don’t spend money we don’t have,” our folks frequently said when we heard of someone in debt.

There were exceptions to that rule.  If one of us got sick enough for a doctor–and that had to be pretty sick–then the doctor’s bill was charged until the next paycheck.  I didn’t go to a doctor until I was sixteen.  Daddy didn’t believe in dentists except for pulling permanent teeth that were hurting–baby teeth HE pulled.  The second exception was groceries.  Daddy insisted on shopping at a mom and pop store where he could “put it on the bill.”  He rarely paid the bill in full, so it would gradually climb to levels Mama could not tolerate.  At $150 or so she would find a job at one of the mills, if one was to be had, and pay it off herself.  I’m sure Daddy sometimes owed for whiskey, but there was fortunately a limit on how much his drinking pals would lend for that, and whiskey dealers didn’t extend credit.  Even if they had, Mama refused to pay for whiskey.

In the fifties and sixties lots of things began to change.  People we knew began to buy houses, instead of renting.  People were saying, “House payments are less than I was paying for rent, so why keep throwing away money on somebody else’s house?”  The same people were buying washing machines, electric stoves, and refrigerators too, and paying for them “on time.” Finally, Mama found a house that was affordable and convinced Daddy to apply for a mortgage.  Sure enough, the payments were about the same as rent. Then, by buying on time, she began getting, one at a time, the modern conveniences other people were enjoying. I think she got her refrigerator after I left home for college.  Then she got Daddy to put in an “indoor toilet” on the back porch.  Eventually, she added a “warm morning” heater, a water heater, a mixer, measuring cups and spoons, and casserole dishes.  When I came home from college I was amazed at each visit how things had changed.

On one of my holiday visits, Mama was trying to sell Daddy on the notion of a freezer chest.  “They’re on sale at Frakers,” she said.

“Yeah,” Daddy replied, “Dealers got Cadillacs on sale too, but that don’t mean I’m buying.”

“With a freezer we could eat out of the garden all year long,” she said.

Daddy snorted.  “I can buy from the grocery store all year long too.”

“Not as good as garden stuff.”

“Good enough for me.”

“Think of all the money you could save on groceries,” Mama persisted.  “The freezer would pay for itself.”

“Good!” said Daddy.  “When it pays itself off, you let me know, and I’ll borrow a truck and go pick it up.”

Daddy was so proud of that comeback that he told it for months every time we had visitors, however, he eventually gave in and he got to enjoy the garden all year long.

2 Responses to BUYING ON TIME