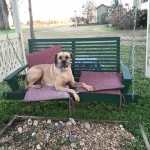 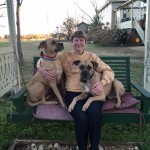 HERE IS AN ANNOUNCEMENT MADE BY NEWSOUTH BOOKS CONCERNING AN HONOR FOR HALLEY:

Faye Gibbons never dreamed growing up in Carter’s Quarter, Georgia, that she’d be nominated for a fiction award named after one of Georgia’s most celebrated authors. Gibbons’s young adult novel, Halley, has been selected as a finalist for the Frank Yerby Awards. Best known for The Foxes of Harrow, Yerby was an African American novelist from Augusta specializing in historical fiction. Like Yerby, Faye Gibbons focuses on historical fiction, but her novels are semi-autobiographical in nature, recalling the difficulties of rural Georgia life during and following the Great Depression. The Yerby awards are given annually by the Augusta Literary Festival – ALF. Winners will be announced on Friday, March 4.

Well, I did it.  Four years after my beloved Bo died, I decided I was ready to find a new Boxer-mix dog.  Or, I should say, we decided.  Benjamin and I added up all the ways a dog would complicate our lives, all the ways it would be expensive, and then there is the dog hair.  Even when you have a dog that “doesn’t shed bad” and even when the dog is restricted to one room in the house, and even when it sleeps outside in a well-built doghouse at night–there will still be dog hair.  Crates of dog hair.  Dog hair even in the room furtherest away from that area where the dog is allowed.  We added all this up and came to the logical conclusion–a dog is worth it.  This time we would get a small Boxer mix–two or three years old.

I went to the Boxer Rescue listings and found Rosemary and Brubeck’s photos almost at once.  The owners, “Marcy” and “Bob” have two very small children, a wonderful house, and a tiny yard.  They had decided the dogs needed more space and more attention than they could presently provide, and they hoped to place them together, since they were litter mates and great companions.  Hmmmm–two dogs–two LARGE dogs, and they turned out to be five years old.  Almost senior status, Benjamin and I agreed.

Despite all this, and despite the fact that we knew we were in danger of falling in love, we arranged with Marcy to visit and meet the dogs.  It was almost love at first sight.  Rosie took to us almost at once, and then Beck decided we were okay too.  We didn’t close the deal on that visit, but we might as well have done so.  We knew these were the dogs.  They had been lovingly cared for.  Their personalities and gleaming coats were a testament to that.  And, we soon decided, having two compatible dogs, instead of one, was good.  They could play together.

I think I called that very evening to say, “We want the dogs.”

It wasn’t a done deal.  Marcy and Bob had questions.  They liked knowing that we had a fenced area where the dogs could play unsupervised, and 70 acres where they could explore along with us.  They were happy that the dogs would continue on heart worm and flea treatment and whatever else our vet recommended.  Probably the fact that we have six dog-loving grandchildren worked in our favor too.  Our adoption was approved and we soon brought the dogs and their beds home with us.  I think those familiar beds helped the dogs feel at home faster.

Rosie and Beck (We decided to shorten their names) have settled right in.  They even know which area of the house is allowed–though Beck continues to accidentally cross the threshold at least once a day.  Each time he acts surprised:  “Oops!  Am I in the forbidden area again.  Sorry!  Wag-wag.”

Already they have discovered one of the joys their former home lacked–a dead, rotting mouse in a pile of leaves next to the barn.  Our brains must be going.  When Rosie and Beck took turns rolling in that same, exact spot, Benjamin and I said, “How sweet–they already feel like farm dogs.”  Then they came running to us, and we held our noses.  A dog is a dog, is a dog, is a dog–forever and ever, amen!

As you can tell from the photos, they are adorable, and already right at home.  Oh, and we have a solution for the dog hair.  If we just make sure that all our future clothing and furniture is caramel color, who’ll notice?

2 Responses to ROSIE AND BECK